Mind Fuel DailyInspire the Mind. Fuel the Self.
Live The LifeExperience 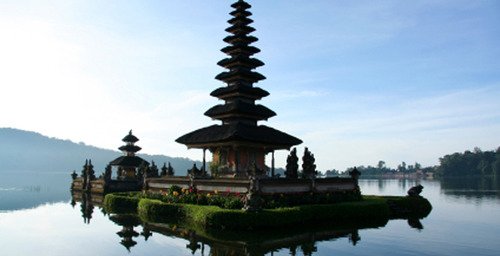 Arguably the best known island in the Indonesian archipelago, Bali on a map, looks rather like a large, exotic fish facing westwards. Its central and eastern regions are mountainous. Mount Agung, the highest point is a volcano, last active in 1963. Coral reefs rim the island. Southern Bali has white sand beaches while those on the northern side have black sand. Just eight degrees south of the equator, Bali enjoys a tropical climate with temperatures averaging 88° F(31° C). The best time to visit is in the drier months between June and September when humidity is low and fresh, cool breezes temper the daytime warmth.

In predominantly Islamic Indonesia, Bali is a Hindu enclave. Over 90 percent of the population is adherents of Balinese Hinduism, which is a fascinating amalgam of Hindu, Buddhist and native deities, besides local practices like ancestor worship and animism. Religion pervades every aspect of existence here.

Life has never been the same since the twentieth century traveler stumbled upon Bali. The island makes more money from tourism than the rest of Indonesia, with agriculture now taking second place in the local economy. It’s not hard to figure out why.

From sinfully luxurious hotels to quaint, family-run outfits, Bali has a wide range of accommodation. The western coastline boasts of world class surf spots; the eastern side is better suited for family vacations. Kura and Seminal are towns synonymous with Bali’s happening nightlife. If you’d rather poke around off the beaten track, visit smaller islands like Nusa Lembongan with quiet beaches and no vehicular traffic

The drive through mountains to the northern coast is manna for the tired, urban soul. Terraced paddy fields interspersed with coffee, vanilla, cocoa and spice plantations make a pretty picture. Exploring the misty trails around the volcanoes is a must-do (you can take a walk across the crater lake at Mount Batur).

Art and life are a seamless blend for several of the locals. Many Balinese work in their fields by day and turn into artisans at night. Religious beliefs are an intrinsic part of artistic traditions. Gold and silver jewelry, textiles, woodcraft, stone carving, painting and metalwork – Bali has it all. A visit to artisan villages like Batubalan, Mas, Celuk, Pengosekan and Sukawati will leave your pocket lighter. Most travelers also do the rounds of art galleries and shops at Ubud, the cultural center.

If you’re lucky, you could catch a religious festival in progress involving community dances and worship. If not, there are staged performances for visitors.  Typically, a Balinese dance performance is a heady combination of theater and entertainment based on mythology; often, there’s a fun, interactive element with performers dressed as exotic creatures bounding into the audience.

There are around 20, 000 temples in Bali of which Besakih or the “Mother Temple”, on the way up to Mount Agung, is the largest and most revered. A trip to the seventeenth century Taman Ayun temple can be combined with a tour of the Monkey Forest, home to around 300 Balinese macaques.

No matter where you live, each of us has to contend with the night. All the electricity in the world won’t change the fact...
Read more
Inspire the Mind

We can't think of a few plants as famous as the dandelion. Who as a child didn’t blow on its soft puffball and watch...
Read more
Feed The Spirit

By the time you’re an adult, extending a hand may practically feel second nature. Where did this simple but fundamental gesture come from?
Read more
Culture

We say it all day, every day. It’s an affirmation, a form of agreement, and a way to express how we’re feeling. But where did this word come from?
Read more
Feed The Spirit

Easy Ways to Cut Back On Plastic

Has the recent straw ban motivated you to be more eco-savvy? Here are eight easy ways to cut back on plastic in your life.
Read more
Culture

“Won’t You Be My Neighbor?” is a Must-See Tearjerker About Mr. Rogers